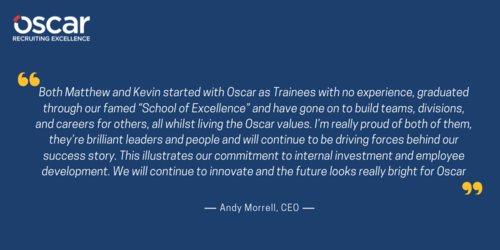 Leading international recruitment firm Oscar has made two senior promotions to fill the positions of Managing Director for the UK & Europe and the US after the business enjoyed their most successful year to date.
Matthew Southworth leaves behind his role as Sales Director to become MD of the UK & Europe whilst Kevin Holt has been promoted from Director to MD of the Americas. Both will be responsible for the development of the UK & Europe, and US teams respectively, supporting them in their strategic growth and leading them to continued success.
These new appointments aim to assist Oscar on its continued financial trajectory amid plans to expand the company’s global reach. They will also help to grow Oscar’s considerable portfolio of recruitment services and resources across its core sectors, which are split between Oscar Technology, Oscar Energy and Oscar Construction.
Oscar’s head office is in Manchester, UK, with additional offices in London, UK, Amsterdam, The Netherlands, and Houston, US, with plans to open a new office in Austin, US, in late 2019. This expansive infrastructure has enabled Oscar to service multinational clients on a global basis and strategically deliver the best candidates, wherever they are in the world.
Both Kevin and Matthew started out as trainees at Oscar Group without any previous experience and have progressed throughout the whole of the business’s career structure before rising to their current MD roles.
Matthew joined Oscar in 2006 at its first home in Didsbury, Manchester, and has gone on to launch their London office.
Kevin started with the company in the UK in 2010 before moving over to the US and successfully catapulting its Technology and Energy divisions. This year he launched the Construction division and, in the coming months, he will open the new Austin office.
Speaking about the appointment, Andy Morrell, CEO for Oscar, said: “Matthew and Kevin were the perfect choice to become our MDs for the UK and US. Their careers have flourished and prospered alongside the growth of Oscar and they are fully involved in the day-to-day running of the business. “
“They have both presided over our most successful year yet, both financially and owing to the growth of our teams and offices. I am confident they will be the ideal people to advance us along our continued pathway.”
Press Coverage
https://www.theglobalrecruiter.com/oscar-appoints-uk-europe-and-us-managing-directors/
https://www2.staffingindustry.com/eng/Editorial/Daily-News/People-Blue-Saffron-Jurek-Talents-Oscar-Technology-51378?cookies=disabled